Home Money How the Tension Between the U.S. and China Is Impacting Gold Prices

Driven by optimism regarding the successful negotiation of “phase-one” of a U.S.-China trade deal, gold prices eased lower for the fourth consecutive trading session on Monday, dropping to a two-week low.

The gains in global markets, emerging confidence that the long-running trade war is finally nearing an end, and strong underlying economic data from the U.S. combined to push gold towards a support price of around $1,450 per ounce.

If investor’s hopes of a successful resolution to the trade dispute are realized, we can expect to see the price of gold to deep even lower into the new year according to financial expert Geoffrey Hammond.

However, gold remains a solid medium to long-term investment prospects as U.S. equity markets, currently enjoying their longest ever continuous expansion, are inevitably bound to contract at some point. Here’s why according to Hammond.

The trade dispute between the U.S. and China — the world’s largest and second-largest economies, respectively — dates to the U.S. imposing tariffs on a wide range of Chinese exports in the summer of 2018. Through a series of escalating tariffs on Chinese exports, the U.S has tried to force China into negotiating favorable terms on a variety of trade issues between the two nations.

An initial round of U.S. tariffs on $50 billion of Chinese goods, announced in July 2018, has since expanded to cover over $365 billion of Chinese exports. China has responded in kind, matching the U.S. in a tit for tat exchange of trade restrictions that have broadly exerted upward pressure on the price of gold, despite the strong performance of global equity markets.

Recent investor optimism regarding a successful resolution of the trade war is not the first time hopes have been lifted since the trade-war began, however, and much uncertainty remains.

President Trump Promises to Get Tough On China

As the Republican presidential nominee, Donald Trump promised to get tough on trade with China. In particular, then-candidate Trump expressed concern about the persistent trade deficit between the two nations, which reached $336 billion in 2017.

Since taking office, President Trump has frequently criticized the Chinese government’s failure to enforce the intellectual property rights of U.S. companies. Calculating the exact cost to U.S. businesses due to IP theft from China in recent years is impossible, but estimates range from $225 to $600 billion.

China’s rigid targeting of its currency – the Yuan – in a narrow exchange rate with the dollar in order to advantage Chinese exporters as compared to their U.S. counterparts have been another frequent target of President Trump’s ire.

President Trump has also strongly advocated for reductions in the Fed’s benchmark interest rate both as a means to stimulate the economy and weaken the dollar, which would make U.S. exporters more competitive while hurting Chinese exporters.

While the Fed has cut rates three times this year, President Trump has publicly feuded Chairman Powell, arguing that cuts haven’t gone far enough and that 2018’s four hikes stifled the U.S. economy. It’s unclear if Trump’s pressure on the Fed to take more aggressive action will pan out; Chairman Powell has indicated rates will stay steady into the new year.

Because the price of gold is particularly sensitive to the strength of the dollar, further U.S. maneuvering to weaken the dollar through aggressive monetary policies will generally drive gold prices higher. Such maneuvering is likely to continue so long as the trade war persists and the U.S. endeavors to keep the dollar weak relative to Chinese yuan.

Both countries have felt the effects of the ongoing trade war. And as the two main drivers of the global economy, the trade war between the U.S. and China has contributed to a worldwide economic slowdown.

Analysts estimate that tariffs have hit China to the tune of $35 billion in 2019 alone. Some of that $35 billion loss for China has manifested as U.S. companies moving their supply chains out of China, whether back to the U.S. or to other overseas markets to avoid the tariffs imposed by the Trump administration.

Certain sectors of the U.S. economy have benefited from that $35 billion loss, recouping up to $14 billion at the expense of Chinese businesses, according to analysts’ estimates.

How the U.S.-China Trade War Has Affected the Price of Gold

Gold, typically considered a safe-haven investment during periods of economic instability, has seen a significant rise in prices since the U.S – China trade war kicked off in July 2018. Indeed, global economic uncertainty — in part driven by the trade-war — has contributed to pushing gold prices 14% higher this year, reaching a six-year high-water mark as of August 2019.

However, spurred by encouraging news from the most recent round of trade negotiations between the two global economic heavyweights, and positive economic indicators in the U.S and Europe, investors have stayed away from the safety of gold in favor of the higher returns offered by global equity markets.

Regardless of any resolution — or lack thereof — in the ongoing U.S – China trade-war the price of gold remains susceptible to wider economic trends, including U.S. equity markets. The current, enduring bull market for U.S. stocks’, now entering its tenth year — its longest-ever — is regarded as already having entered bubble territory by some analysts.

If U.S. equity markets have indeed entered bubble territory, and are thus due for a course correction in the coming year, gold looks poised for a rebound going forward.

Fed Chairman Jerome Powell has indicated that no further interest rate cuts to stimulate economic growth are anticipated this year, expecting a steady, if slow, expansion into 2023.

However, many economists expect rate cuts in the next year, even if negotiations on a U.S.-China trade pan out, as the global economic outlook for 2023 remains murky. And any broad retreat in U.S. stocks is likely to drive gold prices higher.

The price of gold enjoys a strong floor so long as global trade uncertainty remains prevalent in investor’s minds. And in so far as the trade war remains a source of uncertainty, that floor is likely to remain steady.

While rumors of progress on “phase-one” of a U.S.-China trade deal have driven gold prices down recently, there is still considerable uncertainty regarding the timeline for implementing the terms of any deal; talk of a November implementation date has slipped to early 2023.

Moreover, broader economic trends beyond the trade war will play a significant role in the price of gold going forward. Widely expected slower economic growth in the U.S. and China in 2023 is likely to drive a retreat from global equity markets, which in turn will push gold prices higher.

As such, the consummation of a trade deal — or even only continued rumors thereof — between the U.S. and China will continue to exert downward pressure on gold prices. And while any positive resolution to the U.S.-China trade dispute would undoubtedly drive gold prices lower in the short-term, countervailing medium to long-term economic factors are likely to push gold prices higher in 2023. 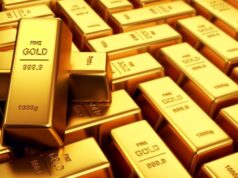 Is Bitcoin Mining Profitable in 2023?